How Threadless display ads could go from #fail to sale 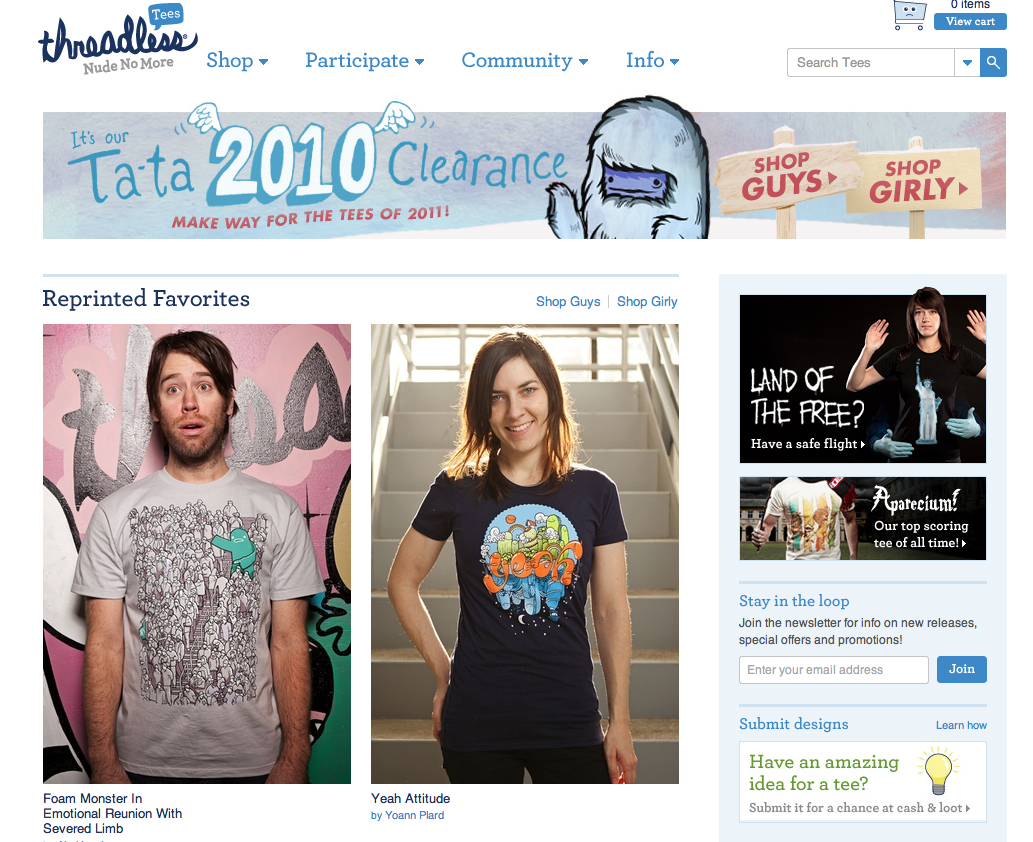 I love novelty t-shirts. Always have. Always will. Whether it has some kind of clever text, funny image, logo from an old video game… I love ’em. For someone like me having websites like shirt.woot.com, bustedtees.com, and snorgtees.com readily available with some amazing designs is awesome. As I’m always on the lookout for another great design, I happen to notice a lot of display advertising for various shirts. This is why Threadless.com‘s display ads drive me crazy.

Don’t get me wrong, I really like Threadless and think their designs rank right up there with the others. I especially like that the designs are community submitted like shirt.woot. Makes me feel like I’m helping out the “little guy” a bit. The problem is that Threadless’ display ads don’t follow a basic rule for display advertising: “Make the ad content directly relate to the landing page content.” Simply put, the shirt design that you see in a Threadless display ad doesn’t show up when the ad is clicked on. You’re taken directly to the sites’ main page. This = #fail. If it was a one time occurrence, I’d write it off as a mistake. As it has happened several times, it’s now a problem. Here’s an example:

I was on Facebook last week and saw this display ad for Threadless and, being the Star Wars geek I am, loved it. 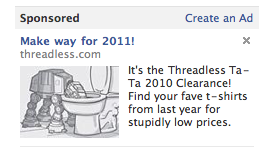 Having not yet purchased a little something for me yet this Christmas season, I thought that would be it. Of course, when I clicked on the ad, I was taken to this… the site’s home page.

No where on the page is the shirt design from the ad. Not to be deterred, I searched around a little bit and still came up empty handed… even after a word search for things like “toilet”, “drink”, “Star Wars”, and “AT-AT”. Needless to say, I put a little more time and effort into the search than most users probably would and after a few minutes gave up. Just like that, Threadless missed a sale of at least $15. By itself, not a lot. But if other users are having the same problem, this could mean thousands of dollars in lost sales all while Threadless is paying for each one of those clicks.

Of course, this problem could be easily solved by doing one of two things. The first would be to have the ad take the user directly to the same design in the ad. This makes sense since they clicked on the ad because they probably liked the design. The second option, since this was part of a larger campaign, would be to take the user to a specific landing page that had all the “Ta-ta 2010 Clearance” shirts with the one featured in the ad being one of the first shirts shown.

Some usability and case studies have shown that after 8-seconds, almost 50% of a landing page’s visitors will have bounced for various reasons. This means that setting display ads up in such a way that a user is not taken directly to a landing page that relates to the ad is driving pointless traffic to your site as chances are they will bounce and not convert.

So moral of the story, when running a display ad campaign, make sure that your ads match up with your landing page to maximize conversions. Otherwise you’re wasting your money on an ineffective CPC campaign and you’re wasting your users time which, in the end, could cause them to ignore your ads in the future.

12 Things Every First-Time Homebuyer Needs to...

Bangor, MI: A Proud Past, A Promising...

Nice post, Brad! I couldn’t agree more. Based on the sites you listed, you should also check out Rizzo Tees (http://rizzotees.com).

Thanks for the comment, Nate! Rizzo is another good one. I also seem to remember http://www.typoapparel.com/ was good too. 😉

Thanks for the link, Jessica! The display ads still need to point to it when clicked on, but at least I know where to get it now! 🙂

I’m very late to the party, but I just saw this post.

What’s unfortunate is that our search is very lacking at the moment. However, that will be remedied very soon w/ the launch of a new catalog and search.