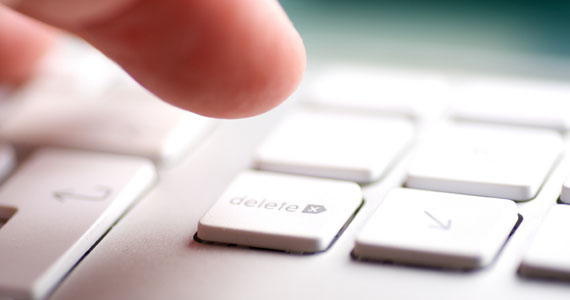 I was recently talking with a friend about Facebook, all the different privacy questions that have come up as of late and just the overall idea of putting so much of one’s personal information online. At the end of the conversation, I asked them if they thought they would be able to just delete their Facebook account without a second thought. They said they couldn’t. I thought about if I could delete mine and had pretty much the same answer. So how about you? Could you delete your Facebook account?

Facebook, as most people are aware, has become an Internet power house. The weekend of March 13, 2010, Facebook once again overtook Google as the most visited website for the week as it also did on Christmas Eve, Christmas Day, and New Year’s Day 2010. It is estimated that its 465,562,160 users also give Facebook about 41% of all social media web traffic. Looking at the usage numbers can also be quite staggering. According to a website-monitoring.com study completed in mid-March, it was reported that:

Of course, as Facebook has grown and changed over time, it seems that some of the magic has been wearing off. Common complaints that have faced Facebook over the past few years seem to mostly center on people being fed up with having the layout change to a format that they didn’t like. As of recent, though, the complaints coming from everyone (from users to congressmen) have focused on Facebook’s usage of user data and privacy.

In case you have been hiding in a cave for the past month or so, the big problem that people have with Facebook currently is their new Open Graph API. This basically allows websites to pull in a user’s Facebook friends and other information to help connect them to other sites and services like Pandora and CNN.com. While the idea behind this is great, in my opinion, Facebook made all the sharing preferences set as ‘on’ by default without much explanation on how to turn it off. This, obviously, upset a lot of people. In the midst of it all, Mashable.com ran a survey for people we were planning on deleting their Facebook accounts to hear what their reason behind leaving was. According to the survey, two of the top responses were, “I don’t trust it with my personal data” and “It sells my data to advertisers”. 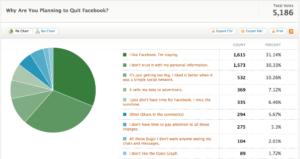 Recently, Facebook has made an effort into creating a solution to users’ privacy concerns by doing a total privacy overhaul that should make it easier for users to customize their privacy settings clearly and easily. It remains to be seen, though, if this move will lessen people’s growing anger and mistrust of the site.

What is your take on all of this, though? Is it too little too late?  Are you fed up with Facebook, all the games, and what they are doing with your data? Could you not be part of the more than 60 million status updates each day and delete your Facebook account?

Please feel free to comment below as I’d love to hear your thoughts!

I wouldn’t delete my Facebook account… based on anything they’ve done to date, at least. But I definitely share less now that I know my content is subject to reclassification from private to public at any time, or shared on other sites without my prior consent.

Not that I have anything to hide (I’m looking at you, Google CEO), but information that’s suitable for friends may not be so suitable for, say, a job recruiter. (tirades against Sharepoint, sarcastic posts that may not read that way if you didn’t know me, et al) If you strip away all the superfluous stuff, it’s still a great way to reconnect and stay connected.

Thanks for the comment, Matt, and I’m totally with you. I know I am much more careful of what I post as time goes on because “once on the Internet, always on the Internet”. I do think Facebook is a great place to connect with current, old, and future friends while sharing mostly useful content. 🙂

According to a Mashable.com survey, only about 25% said they were going to quite Facebook and the official group only had about 34,000 commitments on their homepage (a small drop in the bucket with the growing 465,000,000+ users on the site).