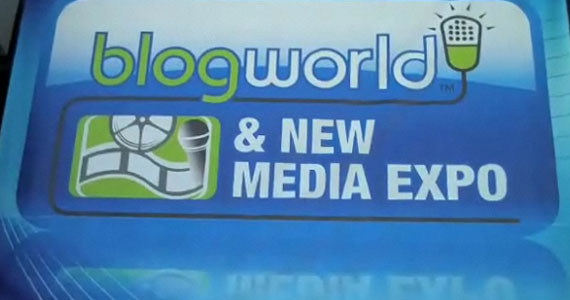 Normally I wouldn’t embed someone else’s work as I like to post my own videos and portfolio, but I thought this episode from a documentary created about the Blog World Expo 2009 is really well done. Plus it contains a lot of really good information and sound bites on social media, social networking, and blogging. So hat’s off to Marc Ostrick and Michael Sean Wright. I think you guys did a really great job with this video!

“Marc Ostrick and Michael Sean Wright set out to document a day at Blog World Expo in Las Vegas. Ostrick, Co-Founder of eGuiders teamed up with fellow documentarian Wright, founder of nicefishfilms, to take the pulse of what some are calling the new media ‘revolution’. The gathering of bloggers, lifestreamers and seasoned journalists provided an opportunity to dialog with media producers from around the world. Ostrick and Wright attempted to push the limits of the current technology, shooting with Kodak Zi8 and Flip Ultra HD cameras. The short doc is part of the conversation focused on the shifting landscape of media. The new dial tone is a dialog among media producers, technologists and bloggers who are looking to express their ideas into the stream of the real-time web. The filmmakers shadowed Robert Scoble, early technology blogger-evangelist as he interacted with the influencers in social media. “Social media… is the new dial tone,” according to author Chris Brogan.”

One of the best things about this video, I think, is towards the end where Michael Sean Wright talks about how CNN doesn’t send a huge crew anymore to events but someone with a small format camera. I see this every day at Ford as, with my position, we shoot a lot of interviews and events using a small handheld HD camera and edit using Final Cut Pro on a laptop. Sure, for major events things were a nicer camera/lens would be required, we hire out professional camera crews and edit on high end gear. But for the everyday communication from Ford to its employees and customers, the format has changed a lot. An example of this is the interview I taped with Mark Fields talking about establishing trust with employees and customers through communication.

In the end, great job to these guys on putting this together!

eBooks: The Good, The Bad, and the ‘Meh’

How Businesses Can Succeed at Social Media:...

Marc and I wanted to thank you for sharing this video. We continue to document the rapidly changing landscape of filmmaking. It’s interesting that you mention the situations where larger cameras are called for. We just returned from CES where we added two Canon’s to the mix. We shot with 5D and 7D in 1080 and the Zi8’s in 720. The Canon’s were great performers and still a smaller footprint than the standard cams. Our mission at CES was to document building a live streaming HD studio for Robert Scoble. A few years ago, filming at this level and assembling the best tools for a studio was out of reach for most of us. We feel that the equipment has matured and the price point is now within reach.

These are exciting times –

That’s great to hear, Michael, and thanks for the comment! I was just talking the other day with a production friend about the possibility of purchasing a 5D or 7D to use for HD shooting as it is a small unit and offers the ability to use all the great Canon lenses. Being a small budget video guy, there is no way I could afford the $20k+ for a full size HD camera. But you look at spending the $2k plus cost of lenses for a 7D and record beautiful full HD… why not?!? 🙂 I also purchased a Zi8 back in November for personal use and love it. It suffers pretty bad in really low lit spots, but otherwise, the video that comes out of it is amazing. These are exciting times indeed!

Let me know if you do another edit for the footage you shot out at CES. I’d love to see it!